Hira Dhamala has been Managing Director of Karnali Excursions since the company was established in 1997. Prior to this, Hira and several friends started working together to lead treks, and this group of friends formed the basis of what is now Karnali Excursions.

Hira was born in the Himalayan village of Khanigaun, in the Langtang region, and to this day maintains a deep connection with the Himalaya Mountains. When he was twelve years old his family relocated to the jungle area of Chitwan, and the mountains became a distant memory, and no longer a daily presence in his life. When he decided on a career in tourism, Hira was drawn back to the mountains of his early childhood, and he began his intensive explorations of Nepal, Tibet and Bhutan.

Hira has led treks for over seventeen years now, and even when he is not personally guiding guests on Himalayan adventures, he often explores the outer reaches of the Himalayas to learn more about bird watching and Himalayan nature photography. Having successfully lead more than 2,000 people to the Mount Kailash Pilgrimage, has earned the great admiration and affection of these many pilgrims. Hira has led uncountable groups to Everest, Manaslu, Annapurna, Gasaburam and K2. Amongst his many clients are groups belonging to veteran mountaineer associations and the Royal Geographical Society.

When leading treks, Hira can always be counted on to relay the traditional stories of the region. Often he will quote from the ancient books of the Hindu and Buddhist traditions that relate to the areas being explored. He loves to tell the old stories of the mountains, especially those based on these ancient books.

Hira also contributes his time, efforts and financial support for social work in Nepal. In 2004 he helped build the Ratna Nagar Community Library in Chitwan where students, local farmers and the business community of Chitwan have access to over 10,000 books. He also focuses much of his free time promoting education for the handicapped and disadvantaged rural youth.

When he is not personally leading treks, Hira welcomes each guest and attends to all the details of their, ‘Journey of a Lifetime’. Over the years he has gathered a uniquely kind, capable and experienced staff who work in close co-operation, handling every aspect of the treks and tours organized by Karnali Excursions.

Tanka Duwadi has been with Karnali Excursions as tour manager for the past eight years. He wasTanka Dawadi born in Tandi, Chitwan, very close to the Chitwan National Park in southern Nepal. Since childhood, Tanka has found himself drawn to the social and cultural aspects of life, wanting to work with the people of Nepal helping to keep their culture alive.

After receiving his Bachelor’s Degree and teaching for five years in Chitwan, Tanka moved to Kathmandu, abandoning his plans to continue with his further studies in education. With a desire to somehow share his knowledge of the people and cultures of Nepal with the international community, Tanka joined Karnali Excursions in 2000. He joined the Tourist Guide Training, organized by Nepal Academy of Tourism and Hotel Management (Government of Nepal, Ministry of Tourism), and later studied Managerial Training to sharpen his knowledge of the hospitality business. As a tourist guide, he has developed an incredible knowledge of Nepali and Tibetan history, culture, tradition, nature and religion. Because of his deep respect for all cultures and religions of Nepal he is a very patient and polite person, which has helped him lead many successful tours in Nepal and Tibet.

Ramesh Chaudhary works for Karnali Excursions as a sales and marketing executive and senior trek team leader. He was born in Sauraha, the heart of Chitwan National Park. His childhood passion to become a naturalist inspired him to study forestry, birds, mammals, mountains and other various aspects of nature.

Ramesh moved to Kathmandu and joined Karnali Excursions in 2006. He received Trekking Guide Training, jointly organized by Nepal Academy of Tourism and Hotel Management (Government of Nepal, Ministry of Tourism) and Trekking Agents Association of Nepal (TAAN). He also took an Advance Wilderness Medical Course, organized by Kathmandu Environmental Education Project (KEEP).  He also studied anthropology and history to broaden his guiding horizon. As a senior trek team leader, he has developed incredible knowledge on Himalayan biodiversity, culture, religion and tradition. He has led successful treks to Holy Mount Kailash, Everest Base Camp, Round Manaslu, Annapurna Circuit and Langtang Valley.

Rajendra Dhamala joined Karnali Excursions in 2014 as our tour manager and senior trek leader. He was born in Jyamrung, a beautiful mountain village in Dhanding district, west of Kathmandu. He now lives with his family here in Kathmandu.

After completing his college studies in English literature, as well taking trekking guide training here in Kathmandu, Rajendra began working as a senior trek leader, and continued learning more about trekking with further training from Eco Trekking Workshop and Food Preparation and Control Training. He has spent time in the USA, where he also took a Safe Certification Training organized by the National Restaurant Association at Four Point Sheraton, Hyannis Resort, MA.

Rajendra’s passion for exploring the beauty of Nepal, as well as its culture, nature and wildlife is what brought him back to Nepal, where he continues to lead successful treks, birdwatching holidays, nature tours, cultural excursions and pilgrimage journeys in the Himalayas. 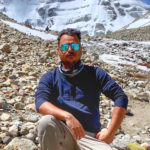 Kiran Sapkota joined Karnali Excursions in 2014, and ever the since he has been working as a trek team leader. He was born in Nuwakot district, which is nestled on the lap of Ganesh and Langtang Himalayan ranges.

In order to pursue his childhood dream to become a prominent trek team leader and professional cultural guide; he moved to Kathmandu for his further studies after graduating from high school. After completing college level of education, he took Trekking Guide Training, which was jointly organized by Nepal Academy of Tourism and Hotel Management (NATHM) and Trekking Agents Association of Nepal (TAAN). In order to enhance his medical knowledge, he also took Advanced Wilderness Medical Course, organized by Kathmandu Environmental Education Project (KEEP).

He has already led numerous successful treks in the Himalayas and pilgrimage tours likes of Chardham Yatra, Shree Amarnath Yatra, Kailash-Mansarovar Yatra and Muktinath Yatra in India, Tibet and Nepal.

His professionalism, simplicity, honesty, charming personality, and his willingness to share his wealth of knowledge with his clients, have helped him to become a highly demanded trek team leader and professional culture tour guide.

Bishnu Dhamala was born in 1977.  His home village is Nuwakot at the base of the Langtang Himalayan Range. Growing up in the mountains, Bishnu’s personality displays all the hospitality, kindness and strength of the Nepali mountain people.

Bishnu has many years of experience leading groups to the Everest Base Camp, the Annapurna Circuit, Mustang, K2 North Advanced Camp, and Mount Kailash – Lake Manasarovar in Tibet.  Guiding more than 30 groups on the Kailash Pilgrimage, he has well earned his reputation as one of the most kind, friendly and experienced guides in the region. Bishnu’s naturally hospitable nature has justly earned him fame amongst the many guides in the Himalayas.

Often accompany Hira Dhamala, the Owner of Karnali Excursions, as a co-expedition leader, he is much loved and respected for his steady service to clients and attending to their needs.

Sarala Dave welcomes the pilgrims to the Holy Mount Kailash pilgrimage treks. Helping the visitors Sarala enjoy this long wished-for and awaited experience is her personal goal. She is very happy to be associated with Karnali Excursions, and to have this chance to meet and greet all pilgrims to this holy mountain adventure.

Her obvious love of life extends to her friends and community in the planning of parties and other group events. Organizing, decorating and entertaining with Garba and dances all keep Sarala happy and young. She extends her joy of life to the pilgrims to the holiest of the holy places, and enjoys sharing in their quest for a once in a life time experience.

Savi Meghani was born in India and moved to the U.K. in 1976. After visiting Holy Mt. Kailash and Mansarovar Lake on multiple occasions with Karnali Excursions, she now volunteers at Karnali Excursions as a coordinator.

In her spare time she practices yoga, which has played an important part in preparing her for Himalayan Pilgrimages.

It is Savi’s heartfelt desire to help others experience the profound nature of these once in a lifetime journeys.  She enjoys sharing her experiences and helping others prepare for these adventures, making sure they are mentally and physically prepared for these uniquely wonderful and exhilarating adventures. Proper guidance and preparation is a key to her along with attention to details. You will return home refreshed with spiritual inspiration to last a lifetime.

Vanita Hirani was born in India and raised in Nairobi, Kenya. She currently lives in London and volunteers for Karnali Excursions as a coordinator.

Vanita loves nature and is also a keen enthusiast when it comes to performance in arts such as yoga, which she has been practicing for more than 15 years. Not only does she perform yoga, she has further enhanced her skills by teaching it.

Vanita thoroughly enjoys her travels; she has travelled to the Himalayas and to many parts of India. As a devotee of Lord Shiva and upon successfully completing the Kailash-Mansarovar Yatra several times and inspired by her spiritual experiences on pilgrimages. She now enjoys sharing her experiences with other people helping them to prepare physically as well as mentally for their journey ahead enabling their dreams to come true.

Vaishali Thaker based in the United Arab Emirates, is one of our mountain enthusiast with a versatile back ground of teaching Yoga, Meditation, Life Coaching, Training and much more. In addition, she has 14 years of experience working with Award winning Airline, Etihad Airways. She brings with her a paramount of professionalism and qualities that complements Karnali Excursion’s vision.

In everyday life she seeks opportunities to be a better person; to practice life in an inspiring light. From childhood she have found immense contentment in sharing smiles, taking this element of her existence very sincerely she actively works with Prayas which is a children’s home, dikra nu ghar which is an old people homes, empowering youth, relief work during earthquakes in Nepal, floods in Kashmir, Chennai & Nepal and much more..

She believes that experiencing the mountains have been an awakening journey by not only giving a completely new meaning to ones life but also lighting up the mind and invoking the Shakti (Energy). She has grown, healed and explored herself with these Journeys to Kailash and has a lot to share from her experience. So come journey with Vaishali and know more…

Harish Patel is born in India. He has completed undergraduate degree in chemical engineering in India then moved to USA in 1973 with his parents. Worked at Chrysler for 32 years in Emissions and Certification department as a Project engineer and Program coordinator. He took Retirement in 2007 and currently volunteering at University of Michigan hospitals.

He enjoys providing unconditional service to spiritual activities. His skill will be very useful   for Kailash pilgrimage planning and coordination. Whenever possible he would devote his time and efficiency.